It is no secret that my secret is that I have Fibromyalgia. I am living with an invisible, chronic illness that is beating me up while pretending otherwise. To the eyes of people, I am too young, too lively, too good looking or even too faithful to be sick (I know, I’ve heard it all). Therefore, I can do nothing else but pretend to be okay when I’m around them. Why? because I can’t get them to believe me. I can’t convince them that I am suffering every day of my life and I’m simply tired of trying.

But don’t get me wrong. I tried. I tried everything I could to explain what I was going through. I tried to educate as much close people as I could so they would stop judging me and I couldn’t get anyone, literally, beside my husband, to even pronounce the word « fibromyalgia » correctly. I call it the Fibro-WHAT effect and I as much as I would want to talk about it more, I’m sick and tired of it.

So I started keeping it to myself. I started acting like everything was ok, pretending that I was just busy with things, with life… anything worked until I ran out of ideas. Being jobless or actually having a job that doesn’t earn you anything, doesn’t help with boundaries and getting people to show you some respect.

« You don’t work, that leaves you a lot of free time to (insert whatever they need you to do). »

« My life, My time » does’t seem to be an appropriate answer and neither is « I have a chronic illness that only enables me to be active half of the time, at best ».

I tried so hard that I ended up doubting my self again and it felt like going back to the start but with a serious emotional burden this time. I am sick, I have been fighting this for more than two years and all this trying and failing didn’t help me much. In fact it made me believe that somehow I could go away with this and never have to explain anything to anyone ever again. But once again, life proved me wrong and my emotional baggage ended up wide open on the floor for everyone to see.

« If you want to hide a secret, you also need to hide it from yourself. »
– Georges Orwell.

My older sister had a baby. Her second child actually. A beautiful little girl that came to enlighten our days and life. Everyone was happy, everyone was eager to see her sweet little face starting by me, but then again I couldn’t help it but think about what such event meant for me in a technical way. I had to travel to my hometown and spend a few days with my family for this special occasion. My mom didn’t explicitly asked for help but she was obviously not handling all the movement and people so well and I had to give her a hand. My sister also needed help with my little nephew and once I got home I quickly realized that the situation was getting out of hand. I had to do something.

First, I had to stop complaining about how uncomfortable and even painful it is to travel 300 miles and not be able to sleep for many days in a row. I couldn’t just think about myself when the most important people to me, were having a hard time. I, too, was having a hard time but in a sense, I am used to it. They’re not.

When I took upon myself to try and take care of my nephew for more than three hours, I realized that I simply couldn’t do it. I was physically unable to follow every one of his steps which stressed me out a lot because I was afraid of what could happen. I almost fell asleep when watching him half of the time and I couldn’t even remember where I put his favorite figurine. I felt useless and exhausted and no need to say that mentally, there were things happening, eventually leading to a breakdown.

After five long days of suffering and bad babysitting I was feeling emptied and… angry.

Angry at myself and at everyone. How could I ask so much from myself when I know that pain and distress is all I get at the end ? How could they not see that « normal » is not a state I am familiar with anymore ? Do they not care ? Am I so meaningless that even though they see me crawling to my bed nearly every day, they just don’t get it ?

I needed to get away from this. I needed rest and sleep. I needed to breathe, cry, morn my young days in peace, away from all of this but I still didn’t want anyone to be disappointed by me. One of these mornings, I finally went to my mom and told her that I might have to get back home sooner. Usually when she asks why I cannot stay longer since « I am not working », I just put it on my husband -like the pitiful coward that I am- and tell her that HE has work to finish. But this time, I decided to not be a coward and speak up. That was the worst initiative ever.

I yelled that I needed to rest and take care of myself. I furiously asked for respect and a little more appreciation and understanding when my sister started yelling over my head. She had heard our discussion and immediately took it personally, thinking that I was complaining about « spending a few hours with my nephew ». The thing is, she was going through severe baby blues while obviously denying it and my call for help sounded like the worst reproach of all to her ears.

And Yes ! I had to tell her that she was being rude regarding my situation – situation that she voluntarily ignored since I had already told her about it. It was considered as unnecessary reckoning and to be honest, it did sound a lot like that. Our altercation ended up with my sister yelling furiously while asking me to stay away from her child and my mom asking me to leave since there is « no place for disrespectful and careless people in her house ». The irony ! 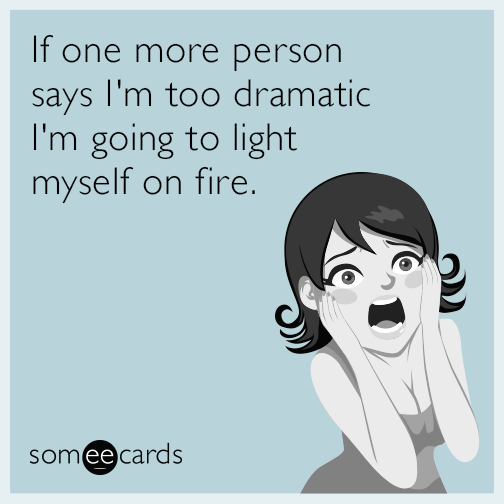 All I coud think of is « I did it again ». I expressed myself in a messy manner at the wrong time, wrong place and ended up being rejected as expected. But as time goes by it seems to me that it’s never quite the place or the moment to talk about my condition. So I left, and in tears this time. I was just ready to go and probably never come back. Just to make a point. If going away from the ones I love most is the only way for me to exist in peace, then be it.

But again, things are never that simple. I had to get back and apologize to my sister. I could’t ignore the difficulties she was going through when I, myself, have been fighting depression for years. Also, I couldn’t let her think that my nephew was a burden to me. Children are off limits, they don’t need any of that, they just need love and I am willing to give it to them to my fullest ability.

Most of all, I could’t let my mom think that I ha turned my back on her when I am usually the one who gets her the most. I needed to tell her that I would always have her back even though I could get crazy sometimes. It has nothing to do with crazy and it hurts to even think about it but what else could I say ? I had to make it stop.

I was hurt because I realized that I couldn’t jut walk away. I can’t keep lying either, but I can’t seem to find a way to tell them that I am sick. That I can’t do normal.

I came back home with this fire under my chest and this bitter taste in my mouth, probably because of the words I still couldn’t say. I can’t say that these unfortunate events were useless for my cause. At least they understood that something was going wrong with me and that I could go nuts in case of fatigue. Not exactly what I was hoping for but at least it might prevent them from asking too much from me, which is something.

This whole act is not getting me anywhere. It only made it worst. Confusion and resentment is all you get when you lie about your real life. From the early beginning, I knew I would have to fight to BE. For different reasons maybe, but I always felt compelled to explain myself. I always had to find the right words, the words that wouldn’t offend, scare or blame anyone while having to deal with their offending, scary and blaming words. I don’t know if I will ever find a way to show them what it is really like to have Fibromyalgia and maybe then, I could finally be okay living with fibromyalgia.