Did suffering from chronic pain made me have less or more empathy toward other people’s pain ?

This question is definitely not an easy one. Not easy to answer nor even to ask. We already know that one of the two options isn’t easy to admit but I think that it is crucial to try to answer this question. So let’s talk about my personal experience, on a first person basis to see how I am dealing with this so far. I, am not sure if being constantly in pain made me more empathetic or more careless.

Did I ever think that someone was overdoing it comparing to what I was going through? Have I ever wanted to scream at someone who gave me the « you don’t know what it is like ? » treatment when in fact, an aspirin could do it ? I think we both know the answer to these questions. I did and I think I might have to do it again. Listening to people complain about having a flu and being angry because they have been sick and tired for more than three days is simply annoying and emptying. I find it hard to feel sorry for them and the less I feel it, the more you could see it on my face. I do my best to smile, Joker style, hoping no one would notice.  However, I am not talking about debilitating or/and life-treathning conditions obviously. I know people can be in pain for so many other reasons than a chronic pathology, but getting sick once in a while, is not quite the same. That was the debate I had with my husband and that was probably the main reason why I had to try and answer the big question.

My -hopefully- temporarily sick husband made me wonder if I was a good person or a more horrible one. When I heard him say that he had a hard time managing it (I am telling you, some men really lose their senses when getting sick, that is not a myth) because he was not « as used as me to migraines and muscle pain », at that moment I couldn’t figure out who was the uglier ? Him or me ? The one who thinks that someone could ever get used to being in pain or the one who asks for a little less moaning and complaining cause obviously, no one his dying out here ?

So I thought about all the times that someone came to me to talk/complain about a health crisis and tried to remember what I felt like in each and every situation (not all experiences are similar, obviously). I thought it would help me to get an answer and here is what I concluded. There is one comment that comes to the surface almost every time. « If they are truly going through so much pain and misery then why is it so hard for them to understand my situation ? why do they still look at me awkwardly if I happen to share with them a piece of what I endure ? They don’t even seem to believe me when they are here, standing in front of me, fishing for comfort. Isn’t it a little bit unfair ?

Empathy : 1. the imaginative projection of a subjective state into an object so that the object appears to be infused with it. 2. the action of understanding, being aware of, being sensitive to, and vicariously experiencing the feelings, thoughts, and experience of another of either the past or present without having the feelings, thoughts, and experience fully communicated in an objectively explicit manner.

I firmly and naively believe that one should not expect to be treated differently than he or she is treating others. So I guess we have a winner ! here is the real problem behind my empathy issues. I find it hard to give something I don’t get or I don’t have. I am not sure if it’s the right choice of words but I do think that it is very frustrating and it’s common knowledge that frustration is never a good thing on the long term. In fact, what turmoils me most is that I don’t want to find myself comparing my condition or life to anyone else’s ! Whatever the situation, I don’t want to turn into a living defense mechanism ! I don’t want to question how good of a person I am every time someone is being unfair or even indifferent to me. Their indifference might hurt me and most of them might not even know what a chronic illness is, but suffering in silence and pretending to be okay so that nobody judges you, doesn’t make it any less painful.

So here I am again, not handling my decision of keeping my condition on mute, out of fear. From now on, if someone talks to me about his/her pain or condition, I guess I will just have to smile at them and tell them that they will « eventually be okay ». Spot the irony ? I am now officially turning into one of these people, who tell you you’re going to be okay, either they mean it or not.

Well, we’ll see about that, but one thing is for sure : I might not know if chronic illness made me a better person or rather a more complicated one but at least it makes me question myself in ways I never thought I would have the courage to. 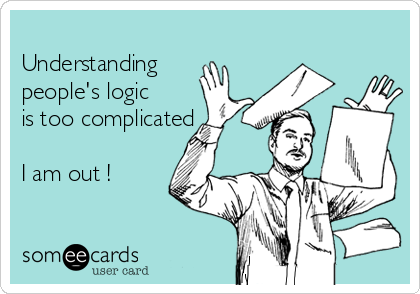